The purpose of possessive pronouns – like my, your, and their in English – is indicating possession or ownership.

It may be useful to think of possessive pronouns as a cross between adjectives and personal pronouns. First, they attach to other parts of speech in order to describe them, just like adjectives do – good friend and my friend are really similar in terms of structure.

Second, they are used to refer to an entity without explicitly naming it – his friend can mean Tom’s friend, similarly to how he can mean Tom.

The analogy to adjectives will prove particularly helpful when learning their declension patterns in Polish. But first, let’s get the simple things out of the way.

In Polish, unlike in English, there is no distinction between possessive pronouns attached to nouns and those standing independent of nouns.

Mój pies jest mądrzejszy niż twój. (“My dog is smarter than yours.”)

Mój jest mądrzejszy niż twój. (“Mine is smarter than yours.”)

Polish does, however, distinguish between second person pronouns in the singular and the plural (English lumps them together into your). When you use twój, it’s always clear that you’re referring to a single person. Likewise, wasz will always refer to more than one person.

The possessive form jego is shared between the masculine and neuter pronoun. Pretty straightforward.

One thing that might not be so obvious from the point of view of an English speaker is that you can leave out the pronoun altogether when the possessive relationship is more or less obvious. Most often, this happens when talking about body parts, personal possessions, and relationships:

Tom poszedł do sklepu z mamą. (“Tom went to the store with his mom.”)

Every time we use a possessive pronoun, we can distinguish between two separate entities, with one of them (let’s call it the owner) owning the other one (which we’ll call the owned object). Of course, the relationship is not always strictly about ownership – though you might refer to a group of people as “my friends”, you don’t really own them in any literal sense.

You see, the forms listed in the table at the beginning of the previous section are the most basic forms of Polish possessive pronouns. While they cover all the possible owners (from 1st person singular to 3rd person plural), they do not account for all kinds of potential owned objects.

The singular masculine pronoun mój will be a perfect fit if we want to describe the word syn (“son”), but it cannot be used together with the noun córka (“daughter”) – in this case, you’ll have to use the singular feminine form moja. Likewise, if we’re referring to the word dzieci (“children”), we need to use the plural non-masculine pronoun moje.

Here is what you end up with if you add the number and gender of the owned object to the equation: 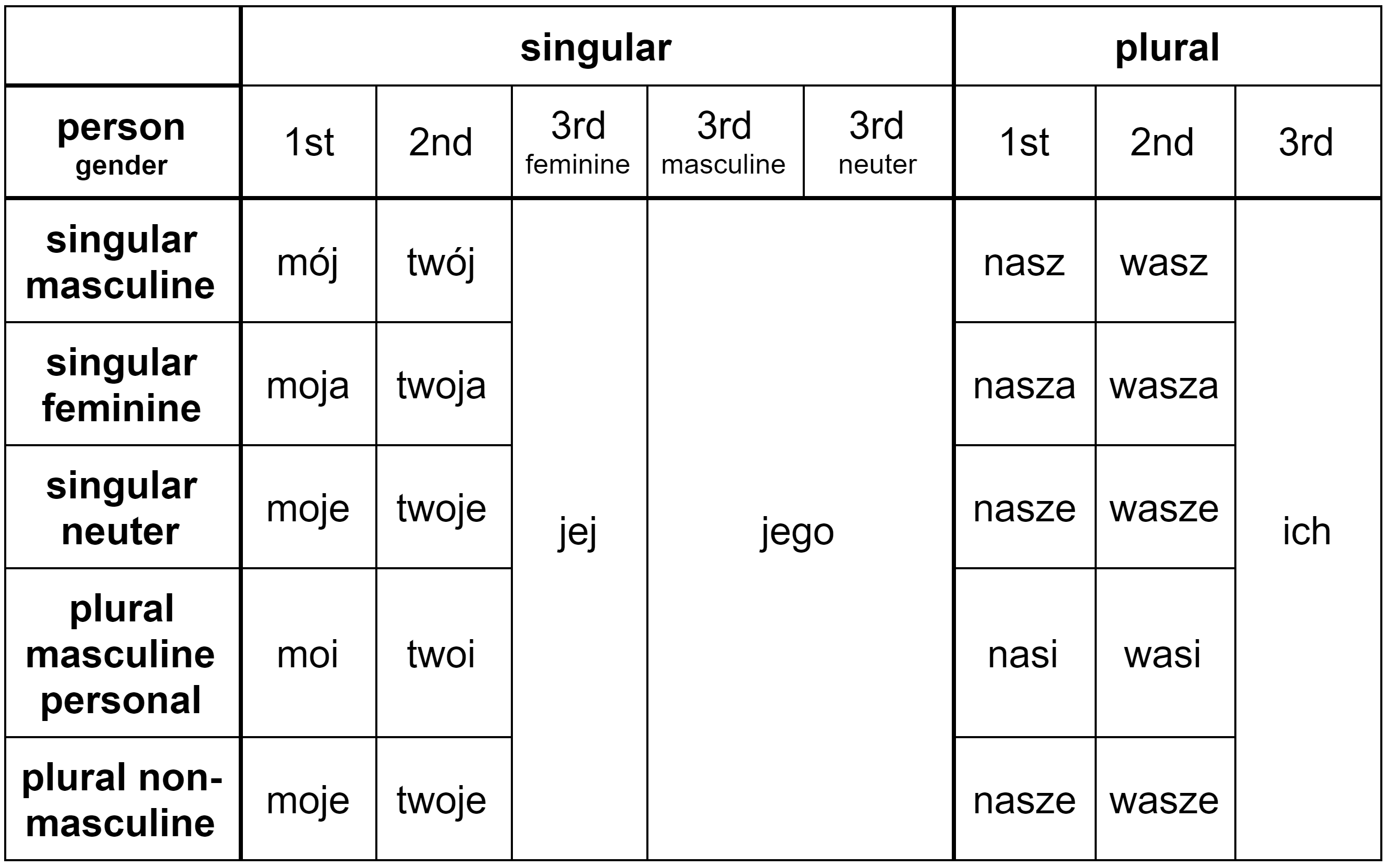 You’re probably happy to see that third person possessive pronouns jej, jego, and ich all have fixed forms. Regardless of the number and gender of the owned object and their role in the sentence, they will always stay jej, jego, and ich.

It is quite easy to mix up the role of the owner and the owned object in shaping the form of first and second person pronouns. This is why you should keep these two simple rules in mind:

Let’s finish up with a few examples to help you see how this works in context:

Czy to twoja książka? (“Is this your book?”)

Jego syn jest geniuszem. (“His son is a genius.”)

Nasi goście siedzą w salonie. (“Our visitors are sitting in the living room.”)

Wszystkie wasze koty są szare. (“All of your cats are gray.”)

Mam swoje własne problemy. (“I’ve got my own problems.”)

In each of the phrases above, forms of swój “borrow” their meaning from the remaining part of the sentence.

Finally, nagrywasz in sentence no. 3 is a second person singular verb, which tells us everything we need to know about swoje.

To reiterate: while a phrase like mój ołówek will always be interpreted as “my pencil” (the pronoun mój carries its meaning in itself), the phrase swój ołówek can mean “my pencil”, “his pencil”, “their pencil” and a few others – it all depends on the context.

Here is a simple table with all the nominative forms of the reflexive possessive pronoun: 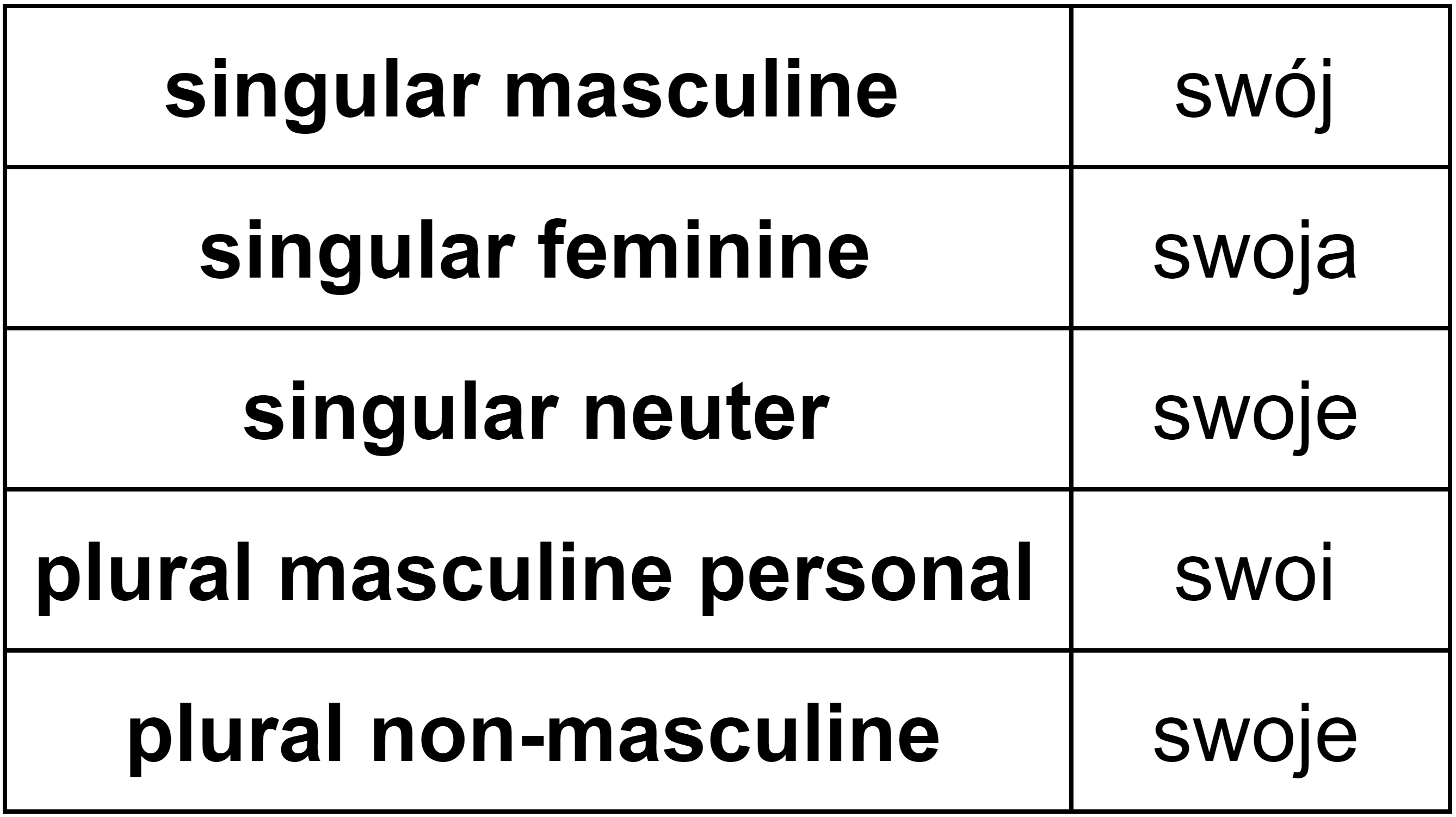 Well, it depends. There are some contexts where it’s impossible to replace a regular pronoun with a reflexive one, and some where it is preferable or even necessary.

First, to even consider using a reflexive pronoun, the subject must be the same as the owner indicated by the pronoun. Thus, it is correct to use swój to say “he is washing his car” (“on myje swój samochód”), but you can’t really use it to express “he is washing her car” – “her” clearly refers to another person here.

Now, let’s look at some sentences where swój is the preferred option:

Here, it is impossible for Tom to have devoted someone else’s life to the study of science. It’s clear that the subject of the sentence and the “owner” of the life are the same person, so it’s necessary to use swoje. Saying jego życie instead would leave any native speaker perplexed – since swoje is the obvious choice here, no one would use jego unless they were talking about a rather unusual situation.

Sprzedasz mu swój dom? (“Will you sell your house to him?”)

The person to whom the question is addressed (indicated by the second person singular verb kupiłeś) is also the owner of the house, so once again, the preferred pronoun is swój. However, note that if the house in question is co-owned with other people (“your family’s house”), the correct phrasing will be wasz dom – marking the difference between the singular subject of the sentence and the plural possessive pronoun – and not swój dom.

Just as nouns, adjectives, personal pronouns and a few other parts of speech, possessive pronouns take different endings depending on their function in the sentence. Thus, the phrase moja książka (“my book”) might become moją książką or mojej książce when placed in an appropriate context.

Each pronoun can take on six grammatical cases, which considerably increases the number of potential forms. But don’t worry, it’s not as bad as it seems.

First, some forms are shared between several cases. For example, the form twoim is used for all the following number/gender/case combinations:

Second, there are clear and predictable declension patterns that repeat between certain pronouns. Take a look at this:

These are all genitive forms. Basically, you just take the basic form, add -ego to it, and change ó in into o (if there’s any) – it works the same for all singular masculine pronouns in the genitive.

Last, but not least, the third person possessive pronouns jej, jego, and ich do not change their forms at all. They just couldn’t care less about this inflection thing.

Now that you know what it’s all about, you are ready to decipher a pronoun chart with all the possessive forms. Identical forms have been color-coded, and third person pronouns have been omitted altogether (they’d just look the same in every cell). 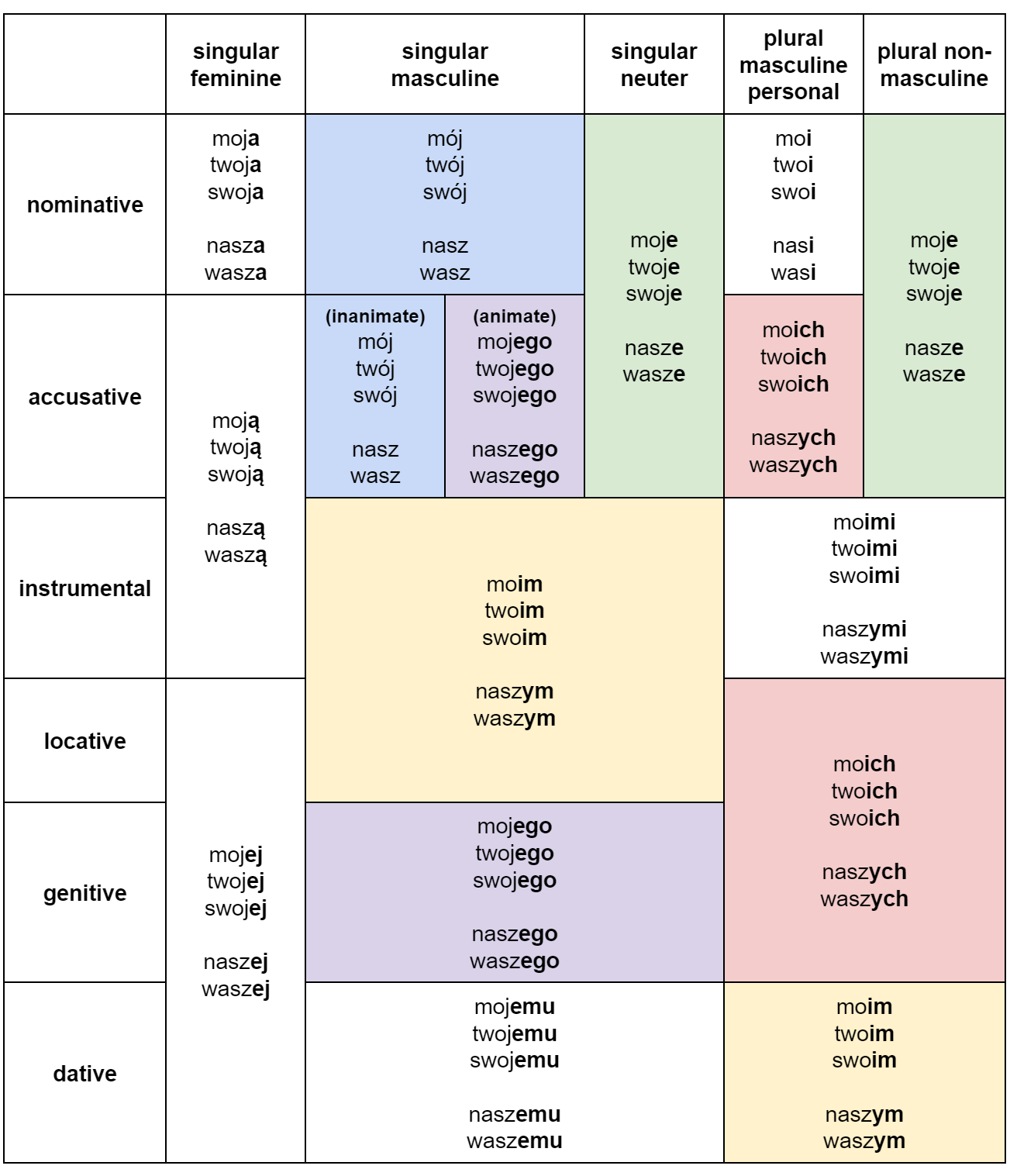 If you’ve studied Polish adjectives before, it should be obvious that possessive pronouns follow precisely the same declension pattern as adjectives do. If you haven’t, that’s okay too – just take a quick look at the declension table in the post on adjectives.

Basically, if you were to take any basic possessive pronoun form and follow the adjectival declension pattern as if it was an adjective, you would arrive at the actual possessive forms listed above with near 100% accuracy.

You can use this to your advantage and learn possessive pronouns together with adjectives. Although they’re different parts of speech, you’ll find it easier to learn all the forms if you pretend that they belong together.

You might also find it helpful to look up the “Understanding Polish adjectives” article – most of the grammar explanations there will be applicable to possessive pronouns as well.

Once you’ve studied the basics, it’s time to take your possessive pronouns to the next level.

Clozemaster’s Polish Pronouns Grammar Challenge is designed to help you expose yourself to various pronoun forms in context, which is the best way to get an intuitive grasp of the underlying rules.

Give it a try and start practicing using Polish pronouns in actual sentences.

1 thought on “The No-Nonsense Guide to Polish Possessive Pronouns”