Just like in English, the default position of Polish adjectives is before the modified word.

However, unlike in English, each adjective can assume a number of forms. This is done by changing the adjective’s ending and depends on three variables: number, gender, and case.

It’s not a coincidence that the variables are exactly the same as for nouns. Polish adjectives always change their form to agree with the gender, number, and case of the word they modify, and in most cases, the modified word is a noun.

While each adjective has a considerable number of possible endings, their declension is actually very regular. This means that once you internalize the general pattern, you will be able to decline any adjective with little effort, even if you’ve never seen it before.

Let’s look at some specific examples.

Number and gender of Polish adjectives

However, when preceded by certain consonants (mostly k or g, and in some cases also n or p) the default hard -y ending becomes a soft -i.

Both czarny and drogi are basic lexical forms – you can expect to find them as the adjective’s entry in a dictionary. They can be described with the following variables:

If we change any of the three variables, the ending will likely change as well.

For example, if instead of a singular masculine noun, we pair the very same adjectives with a singular feminine one, the adjective stem will receive the ending -a (rarely -ia):

Here is a complete table with all the nominative endings and a handful of examples:

This way, we’ve seen how an adjective’s form is dependent on gender and number – the two variables constrained by the properties of the modified noun.

The last variable reflected in an adjective’s ending is its case, which depends on its grammatical function in the sentence.

Below is a sentence employing one of the most basic defining phrases:

To jest dobra książka. (“This is a good book.”)

Here’s what happens if the adjective, along with the noun it modifies, is paired with a structure (in this case a transitive verb) requiring the accusative case:

Czytam dobrą książkę. (“I am reading a good book.”)

Naturally, the noun’s form changes to accusative as well. Remember that nouns and adjectives have independent declensions – their endings are not identical, so they must be learned separately!

Let’s look at a similar example, this time with a singular inanimate masculine noun:

Czytam dobry magazyn. (“I am reading a good magazine.”)

However, if we form a similar phrase in the accusative, this time with an animate masculine noun (denoting a person or an animal), the adjective stem receives the ending -ego:

In this case, instead of “borrowing” the -y ending from the nominative case, the accusative form takes the ending -ego (which is also borrowed, as it is most typical of the genitive case).

When it comes to singular neuter adjective forms, things are pretty straightforward, as their accusative ending is always exactly the same as the nominative ending (and does not differentiate between animate and animate nouns). Compare the two sentences:

Having studied the examples above, you should already have a pretty good idea of what makes an adjective like dobry assume a number of distinct forms. Thus, you have made the first step towards mastering their usage in actual sentences. What’s next?

Well, you can try to memorize the table below… 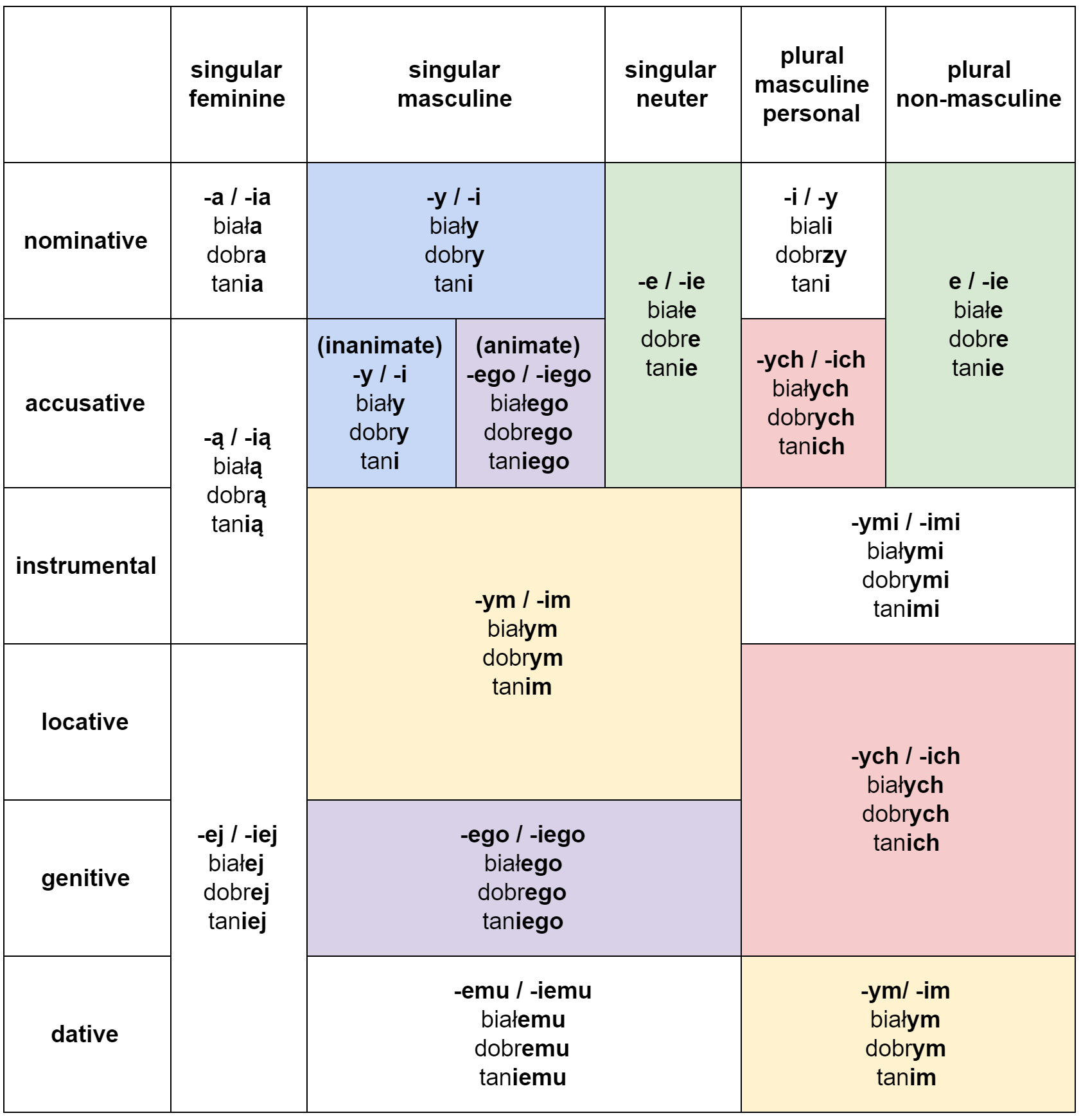 Pretty daunting – six cases and five number/gender combinations. True, some forms might repeat throughout the table, but that’s still a lot to process. On the other hand, if you manage to learn the declension pattern, you’ll find it useful when dealing with some other parts of speech, notably possessive pronouns and demonstrative pronouns.

With that degree of complexity, you can’t really expect to learn what forms to use by rote memorization. This is why the only way to truly master Polish adjectives is to:

After all, that’s what all native speakers had to go through as children… and it worked out pretty well for them. They didn’t learn to use correct forms by looking declension tables – even today, many of them would be a little puzzled if they saw all the possible forms spelled out in front of them in an orderly table.

The Polish Adjectives Grammar Challenge has been designed to help you go through all the steps necessary to achieve proficiency. As you will have plenty of opportunities to put your skills into use and receive immediate feedback, you will eventually acquire the declension pattern just as a Polish child would (only faster).

Of course, when in doubt, you can always refer to the declension table – adapting a more analytical approach every once in a while might help you deepen your understanding.